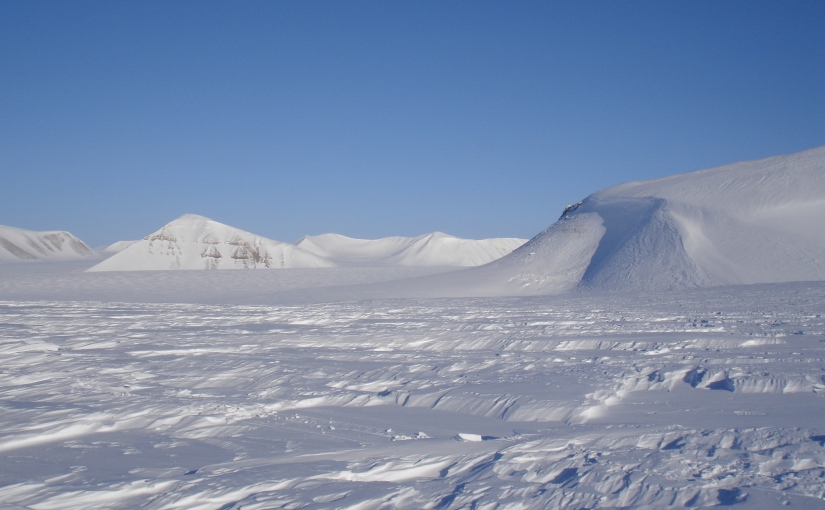 “The Arctic is one of the last great pristine ecosystems, a safe haven for endangered species and home to Indigenous Peoples whose lifestyle has survived in harmony with nature for thousands of years.”

This quote in the wake of COP21, extracted  from a celebrity I’ve never heard of (sorry, I’m just not that interested in actors)  raised my hackles as it repeated yet again the idea that the Arctic is “pristine”.

Even without contemplating climate change, it is most certainly not, as the polar portal season report I was vaguely involved in compiling this year made clear.

There is a whole literature in the humanities on Orientalism and “othering”, about how we define other people and places partly to define what we are not. I’m not sure if there is a term for this narrative of a “pristine wilderness”, let us call it “pristinism ” for want of a better term. But before I list the ways in which the Arctic is not pristine, let me make very clear, I am well aware I also suffer from pristinism, to some extent. What my boss teasingly refers to as “the white disease”, the fascination with snow and ice that makes me want to leave the comforts of house and home and go and live somewhere deeply uncomfortable, and indeed dangerous in order to plumb the mysteries. I have been visiting the Arctic for well over 12 years now, though as most of my work is on  computer, I don’t get the option so often anymore. Maybe that’s a good thing, perhaps the last thing the Arctic needs is more people flying to it.

The ecosystem has been significantly degraded by the loss (hopefully now in reverse) of most of the large cetacean species by commercial whalers. Similarly, walrus and polar bears in Svalbard were almost rendered extinct before hunting was banned. It also appears there were walrus in Iceland when the vikings arrived that, like any polar bear at the present day arriving on Icelandic shores, were quickly dispatched. The Greenland vikings were certainly rich from walrus ivory as their main source of income. Not content with exterminating the walrus the early settlers sent their sheep out and very successfully deforested the 25-40% of Iceland that had been forested, leading to dust storms, soil erosion and the unfortunate inability to build boats to get anywhere else very far away. Deforestation has only recently begun to be reversed. In much the same way Musk Oxen were virtually eliminated from Eastern Greenland by hunting, but then rather too successfully introduced to the west where there has been a population explosion.

Fish stocks have at least been largely preserved in Iceland (sensible given how important fishing is to the economy), but there have been several notorious crashes in different fish species in the North Atlantic and around Greenland. Although, to be fair these latter seem to be at least partly caused by changing ocean temperatures rather than purely overfishing. Then there are the invasive species, largely limited so far to the (admittedly delicious) King crab , an omnivore that will eat everything in it’s path much to the fear of some local ecologists around the Arctic coast of Norway.

And then there are the birds. Different bird species face declining populations due both to loss of habitat outside the Arctic as well as hunting in the Arctic region. I was somewhat surprised, though in retrospect I should not have been, at the very few bird numbers that I saw while on a kayaking trip within an easy boat ride of Nuuk. 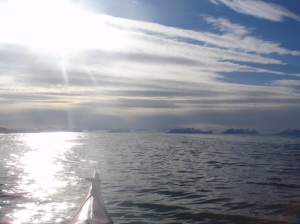 I would have seen many more in the Scottish islands, but if a subsistence species is within easy reach of a large town (which in themselves would have been impossible prior to colonisation), it is an inevitable tragedy of the commons waiting to happen. Similarly, seals are incredibly wary and remain as far from people as possible in Greenland, a big contrast to the rather trusting and curious creatures I have been able to paddle very close to around the British Isles. And Heaven help any polar bear that strays too close to any Greenlandic settlements, legal protection or not…

Part of the problem are the difficulties birds have in reproducing. This is at least partly down to the toxic mix of chemicals stored in their fat, which comes out in a rush when these animals and birds have to live on their body fat supplies – as they do each summer when incubating eggs. These eggs also appear to contain high levels of mercury, cadmium, PCBs, organochlorines, dieldrin to mention just a few, with an effect on the developing bird embryos inside and of course anything that eats either bird or eggs.

A report compiled by the WWF in 2006 (pdf) from the peer-reviewed literature lists dozens of such studies like this one.  There are also suggestions that environmental pollution is having a significant effect on cetaceans as well as in seal species.

And this of course is because that “pristine” Arctic has an extremely high concentration of industrial chemicals, heavy metals and other by-products of our manufacturing society. Albeit a long way from most sources of production. I was once fascinated to discover that all sorts of historic events such as the Greek and Roman production of silver (and it’s leaden by-product) could be identified in the Greenland ice cores, as could the introduction of leaded petrol and it’s later phasing out. The atmosphere acts as a kind of distillation column, concentrating these poisons at the top (and bottom) of the world, not to mention the local sources. There are coal mines in Svalbard, aluminium smelters in Iceland and Greenland, the oil + gas fields of Alaska, Newfoundland, Norway and Russia. Not to mention god only knows what hazardous (radioactive?) waste is leaching away from forgotten islands in the Russian sector of the Arctic.

Because humans are, in the Arctic at least, the top predator.

It is by now well known that with a diet that is high in meat, much of it derived from marine mammals and fish, Inuit peoples in the Arctic have very high levels of toxic chemicals in their bodies, and in their breast milk. Greenlandic women are in fact advised to reduce their traditional foods in pregnancy (pdf) and eat something imported instead. Then some recent research suggested the high rates of Parkinson’s disease in the Faroes may be down to a whale meat rich diet.

Yet at the same time we in the crowded, populated mid-latitudes project our fantasies of a pristine fairy-tale at the top of the world.

The Arctic is very very far from pristine, and if what happens in the Arctic doesn’t stay in the Arctic, the reverse is also true, the Arctic is part of this world for good or ill. There is however, no doubt that it exerts a powerful pull on our imaginations.

There is a reason poor old Ursus maritimus has become the poster children of climate change. Perhaps it’s all the bright white snow and ice, even if the Arctic Report card shows us the browning of the Arctic as snow lies for ever shorter periods at the same time as sea ice cover at the end of summer is similarly declining…

I am optimistic but cautious about the Paris agreement at COP21. I hope it will come in time to preserve some remnant of the Arctic wilderness, but even if it does we still have some big challenges to face. Sweeping these under the carpet for the sake of a convenient narrative about a pristine wilderness is not helpful. I have a great affection for the Arctic, the people and the wildlife that lives there. I started this post originally some time ago but failed to finish it as it made me rather depressed to think about, but then I was put in mind of this poem from Seamus Heaney and decided it was worth finishing after all with this piece.

Clearly, the myth of “The North” and “the Arctic” has been with us for some time, but surely we owe it to the Arctic and the peoples who live there to try and see through the “pristinism” and start to fix some of these challenges?

I returned to a long strand,
the hammered curve of a bay,
and found only the secular
powers of the Atlantic thundering.
I faced the unmagical
invitations of Iceland,
the pathetic colonies
of Greenland, and suddenly
those fabulous raiders,
those lying in Orkney and Dublin
measured against
their long swords rusting,
those in the solid
belly of stone ships,
those hacked and glinting
in the gravel of thawed streams
warning me, lifted again
in violence and epiphany.
The longship’s swimming tongue
was buoyant with hindsight—
it said Thor’s hammer swung
to geography and trade,
thick-witted couplings and revenges,
the hatreds and behind-backs
of the althing, lies and women,
exhaustions nominated peace,
memory incubating the spilled blood.
It said, ‘Lie down
in the word-hoard, burrow
the coil and gleam
of your furrowed brain.
Compose in darkness.
Expect aurora borealis
in the long foray
but no cascade of light.
Keep your eye clear
as the bleb of the icicle,
trust the feel of what nubbed treasure
your hands have known.’

2 thoughts on “How pristine is the Arctic?”