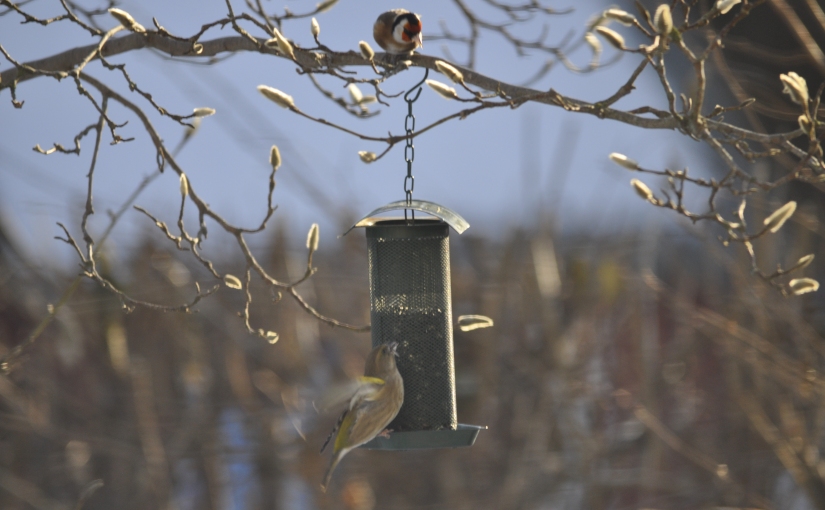 At this time of year about the only thing worth going out into the garden for is to watch the birds. Even in the centre of town where the Sterna nest is located, we have identified 22 different species in the back garden (in no particular order: blackbird, starling, fieldfare, jay, redwing, robin, house sparrow, hedge sparrow, wren, greenfinch, goldfinch, chaffinch, bullfinch, hawfinch, willow warbler, great tit, blue tit, greater spotted woodpecker, magpie, crow, collared dove and pigeon).

As we try to garden for wildlife we’ve left seedheads on plants and I have sacrificed my winter brassica crop to the pigeons (next year I will net them). We have bird feeders for fat balls, seed mix and sunflower seeds and we have also been putting out apples for species such as blackbird and fieldfare. Given the large numbers of birds we’re attracting, it’s no surprise that we have to replenish the food supplies every day or two, especially in the cold weather. I’m still surprised though at how quickly birds find new sources of food. A few years back when we lived in Scotland we put a nyjer seed feeder up in the back garden to attract goldfinches. I’d never seen a goldfinch there beforehand but within a couple of hours we had a pair feeding from it. It’s a mystery to rank with the famous blue tits learning to open milk bottle tops to get at the cream.

Feeding birds deliberately in our gardens is a pretty recent phenomenon, until large urban populations of humans, largely separated from their agricultural roots, were well established, birds were mainly seen as pests, especially species like sparrows which eat grain. It’s also hard to imagine that many of these species were also seen as a human food source until pretty recently. The masterful Birds Britannica book, informs me that goldfinches were almost hunted to extinction in Britain, being considered a food delicacy in the 19th century.  They were in fact one of the first birds the RSPB had on their list of concern. This is pretty incredible to me. They are extremely beautiful, but very small, not much more than a mouthful each and presumably several were needed in each portion. Its a familiar story, as the introduction of modern agriculture with pesticides and the shortage of weed seeds through the winter must also have taken a toll on goldfinches as on many other species, which now have their strongholds in towns rather than the countryside.

The habit of feeding birds has not only caused a shift in which birds live where, it has also apparently led to some species choosing to overwinter much further north than would otherwise have been the case, since there are now reliable food sources about and of course, a run of milder winters has helped. Given the hazards that many songbirds face abroad, for example Cyprus, where they are still eaten and where 1.4 million were taken this winter, this may perhaps be a good thing

Surprisingly though, a recent research study using radioactively labelled foodstuffs found that, in summer at least, bird food from feeders made up only around 5% of an individual bird’s diet. It appears that they see bird feeders as a sort of chip shop on the way home from the pub kind of food – just for a dip in when feeling peckish and not the main source of nutrition except during periods of food scarcity.

Unfortunately there is a dark side to feeding the birds in our gardens. It has been well known for sometime that birds can contract diseases such as aspergillosis, salmonella and e. coli infections as a result of the close contact that bird feeders necessarily encourage. Since 2005, trichomonosis has become an increasing problem too in the finch population, having apparently jumped species from pigeons and doves. It appears to affect greenfinches and chaffinches in particular, but also affects other species and although occurring mainly in the UK, has also been reported in Norway, Sweden and Denmark. The overwhelming popularity of birdwatching in the UK means that it may well simply be better reported than elsewhere.

Now that the snow has melted and the days are started to lengthen again, our feathered friends are bringing us much joy and even the recently hatched Arctic chick is starting to take an interest in their flutterings about the garden.